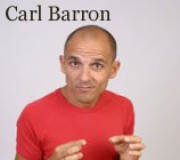 Carl grew up in Longreach in Central Queensland the son of a sheep shearer. Moved to the Gold Coast where he became a roof-titler, moved to Sydney and decided to walk on stage at the Harold Park Hotel one night, told everyone how a bird had poo-ed on him that day and the rest is history.
Carl\I’s non-threatening observational style of comedy appeals to everyone. He has touched the hearts of thousands of people with his gentle, awkward, self-conscious, relaxed and original approach to comedy. Since winning Comic of the year and Best Up and Coming Talent in 1993, Carl has established himself as one of the most accomplished comedy performers in Australia and around the world. This extremely popular and gifted comedian has treaded the boards throughout Australia, New York, L.A, London, Auckland, Ireland, Singapore and Edinburgh.
Carl started his TV career in 1997 and has over 50 TV spots to his credit both in Australia and abroad. His first DVD release won \I’Best Menu Design\I’at the Australian DVD Awards and sales of same have reached 170 000 copies still making it the highest selling stand-up comedy DVD in Australian retail history. His latest release \I’Whatever Comes Next has sold over 130 000 – that\I’s over 300 000 sales in Australia alone!
Having headlined at every major comedy venue and Festival worldwide, no wonder that Carl Barron is one of the most sought after Australian comedians. There are very few Australian comedians on the live scene who have received the same kudos as Carl. Festivals
Melbourne International Comedy Festival Edinburgh Fringe Festival Adelaide Fringe Festival Sydney \I’Cracker\I’Comedy Festival Sydney Big Laugh Festival Montreal \I’Juste Pour Rire\I'(Just for Laughs) Festival 2000 Montreal \I’Juste Pour Rire\I'(Just for Laughs) Festival 2004 TV Credits oz.comedy (thecomedychannel Foxtel) Headliners (Foxtel) Rove (Network Ten) The Footy Show – NRL (Nine Network) – including Live and Sketch Sydney Weekender (Nine Network) Fat Pizza (SBS) Melbourne International Comedy Festival Gala (Nine Network) The Melbourne International Comedy Festival Debate (Ten Network) Live at Jongleurs (Channel 4 UK) Montreal Juste Pour Rire\I’Festival Gala (Canadian TV), 2000 and 2004 Preen Commercial – two campaigns The Midday Show (Nine Network) Hey Hey It\I’s Saturday (Nine Network) Best Of the Footy Show Comedians – Host (Nine Network) New Zealand – Oddfellows Comedy Gala The Glasshouse – ABC TV George Negus Tonight Awards and Achievements Best Menu Design for Carl Barron Live – DVD, 2004 Nominated for ACE Award 1999 Released Carl Barron Live CD in 1999 Nominated for Comedian of the year Maurie Awards 2002 Nominated for a MO Award 2002, 2004 Released Carl Barron Live DVD in 2003 which has subsequently sold more than 170 000 copies Won the BEST INTERNATIONAL SHOW at this years NZ INTERNATIONAL COMEDY FESTIVAL Released Carl Barron \I’Whatever Comes Next\I’DVD August 2005 – it has sold more than 130 000 copies Nominated for ARIA award for \I’Whatever Comes Next\I’DVD – 2006 What the Critics Say \”Carl Barron of Australia was the highlight of the evening, with wry observations and hysterical bits on sneezing, burping, farting and just plain stuff\”…… The Gazette Montreal \”…. They (the audience) were in a state of uncontrollable joy\” The Age Melbourne ….\I’But the star of the evening is Carl Barron, who has the audience in fits with his resonating observations of common experiences. With a dead-pan expression breaking out into gleaming wickedness, this skinny Gandhi-like comedian turns the tables on the mundane, tackling everything from our reactions to stupid questions through to turds with footprints… The Scotsman \”A gifted physical comic and monologist\” The LA Times \” Barron is small and shy, his jokes clean and precise. The audience loves him…\” Harper Magazine \”Audiences are rioting for a glimpse of his shy and sharp routine\” Inpress, Melbourne \”Carl Barron is an awesome standup comedian…. I had tears in my eyes…\”\” The Age, Melbourne \”Carl Barron is a man who articulates the small but precious hopes of a nation\” Herald Sun \”Get ready to giggle yourself silly\” Melbourne Weekly \”His wry, acute insights are so warmly received because people are instantly aware of what he is talking about\” Dominion Post \”People were laughing so hard they were either crying or nearly falling out of their chairs\” Buzzcuts \”Carl Barron is the sort of comedian who gives a good name to observational comedy\” Groggy Squirrel