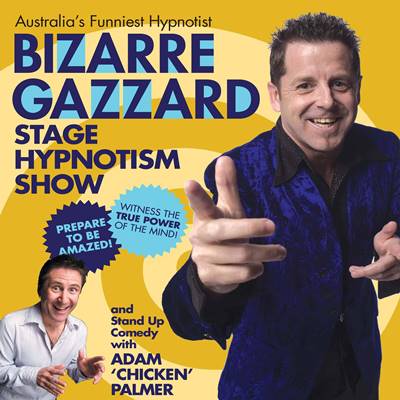 The Bizarre Gazzard is a fully qualified clinical hypnotherapist with over 15 years of stage experience as has his partner in crime, brilliantly funny stand up comedian and musician, Adam ‘Chicken’ Palmer. Everyone loves a superb Chicken Palmer!
Combining music, costumes, comedy and props, this is a must see show where the only people having a better time than the audience are the volunteers themselves. These are the real stars of the night! Perfect for corporate functions and sporting groups, every show is unique, unforgettable and can be tailored to your needs. Not only will you laugh, gasp and roar; the Bizarre Gazzard promises, ‘You Will Believe’!

Rohan hypnotised Shaun Micallef and Dave O\’Neill on air at VEGA FM. At NOVA FM\’s Hughesy and Kate show he hypnotised Jeff Tyler as well as regular guest speakers on SEN and numerous other radio stations.

** As spoken about by Nick Riewoldt on the Footy Show , Rohan hypnotised the St.Kilda football players at Stephen Milne’s house with hilarious results. ** Performed for the Western Bulldogs Mad Monday, Geelong Football Club, Townsville Crocodiles MVP night at Jupiters Casino 2009 and numerous other corporate events. **Performs Australia wide with regular tours of Darwin and Perth. **Bizarre Gazzard’s creed – “The show is ‘fun’ based entertainment for both volunteers and audience alike. No moral boundaries are ever compromised.”